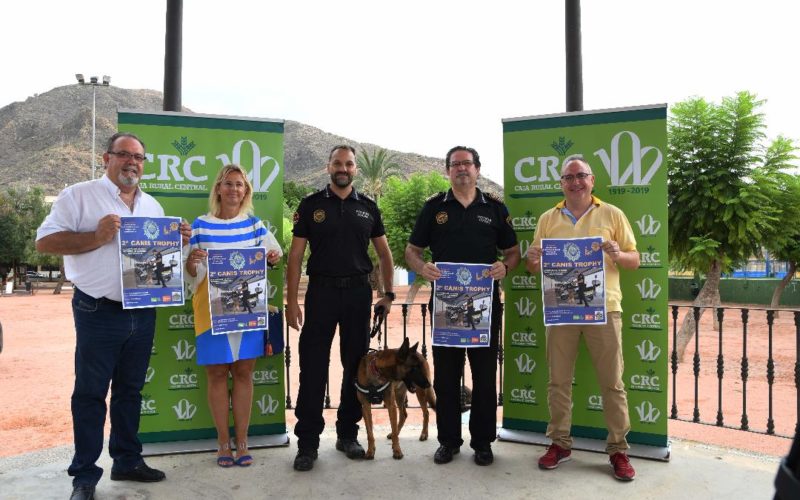 The councilman of Citizen Security Orihuela, Ramon Lopez, has presented the second edition of the Canis Trophy to be held on Saturday, September 7 in Las Espeñetas. Lopez has been accompanied by members of the Local Police Association “Virgen de Monserrate”, organizers of the event, Manuel Lorente and Rafael Pintor, along with the Chief Intendant of the Local Police of Orihuela, José María Pomares. The presentation also had the participation of Mariola Plaza, representative of the Central Rural Box that collaborates with this activity.
López Cabrera stressed that “it is a joy to present this second edition that is having the full support of the council to be consolidated as an activity that values the work of the Local Police. We have set to work to recover the Canine Unit for Orihuela, which together with the School Absenteeism Unit, are two objectives, among others, that we have marked from this area.
On the part of the Local Police Association “Virgen de Monserrate” Manuel Lorente has launched an invitation for citizens to come on the morning of Saturday, September 7, to the park of Las Espeñetas, from 10.00 am in the morning, to see and enjoy how these dogs work in different situations.

Rafael Pintor, the promoter agent of the championship has explained that “there are a total of 13 binomials coming from different parts of Valencia, including a participant from Granada. Attendees may see, among other situations, how they work in the search for narcotics both in vehicles and in open spaces, since the smell of the dog reaches where neither sight nor human smell. At all times there will be a speaker explaining the performances of the binomials.
“La Caja Rural Central, which this year celebrates its centenary, collaborates with this activity to give visibility, and especially in this type of championships that are not very common. And once again the Caja Rural collaborates with cultural and sporting events to be held in the city of Orihuela,” said Mariola Plaza.